As you dine on the dinner train,
we will be traveling over two separate rails lines. The first part of our journey to downtown travels over sections of the Richmond branch of the former Pennsylvania Railroad that connected the Little Miami Line at Penn Junction to Clare Yard in Portsmouth, Ohio. This line started construction in 1866 but didn’t reach Cincinnati until 1887.

The second more scenic half of our journey to downtown travels over the Oasis Line. The Oasis Line is the former Little Miami Railroad that dates back to 1843 and was the city of Cincinnati’s first railroad.  It was also where the PRR and the N&W passenger trains would operate into the PRR’s Panhandle Station which was located at the corner of Pearl & Butler Streets, at the foot of the purple people bridge, just east.

There was a very large, ornate structure that sat at this corner, which had at least five to six tracks underneath a large train shed. On the south side of the facility, very near to the entrance of the “Purple People Bridge”, was the Louisville & Nashville’s freight station that gave the L&N access to Cincinnati and also gave access for the L&N passenger trains to operate into the city as well.  The L&N had their freight station located on the south side of the PRR Depot.

The area where the Theodore M. Berry Park is now located was a small freight yard that ran from “OA Junction” to the overpass for Riverside Drive.  OA Junction was where the approach to the L&N Bridge was located featuring a steep incline that crossed the Ohio River at grade. The bridge abutments are still visible from what is now the “Purple People Bridge”.

We reserve the right to alter our train route in the case of host railroad doing track work on the Oasis line.

1) Our starting point is at 2172 E. Seymour Avenue, just behind the Green Sales Company warehouse building.  We then proceed east two and a half miles over I-71.

2)  Just a mile east of the I-71 overpass, we pass through an underpass constructed of cut stone and lined with red brick which was built in the late 1800’s.  The railroad line above us at this point is the old B&O to Columbus, Ohio.

3) At mile post 8.41 we travel underneath Erie Avenue, which was raised to its present location in the 1940’s to eliminate a very congested railroad grade crossing.

4) On the left side of our train at mile post 8.3 is the former location of the Ford Motor Company’s transmission plant. This facility accommodated numerous rail cars during its heyday. A Walmart on Red Bank Road now occupies the site. 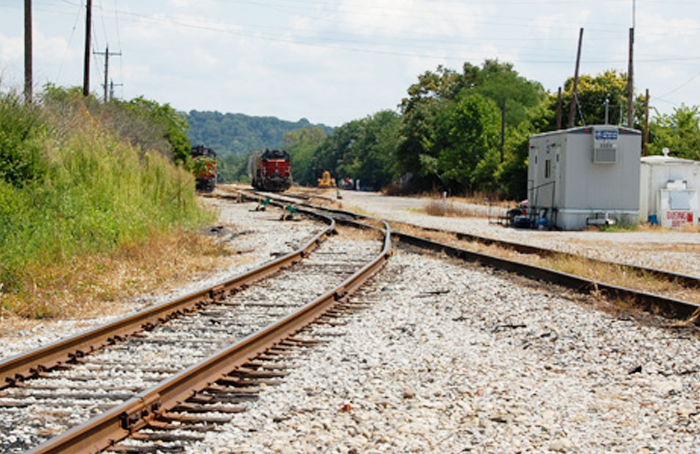 5) At mile post 8.0, we switch over to a connecting track that makes a right turn and heads toward downtown Cincinnati.  This area is known as Valley Junction.  On the right is a small concrete building which houses the electrical equipment that operates the switches (machines that move the switch points in the rail) allowing us to head toward Cincinnati. 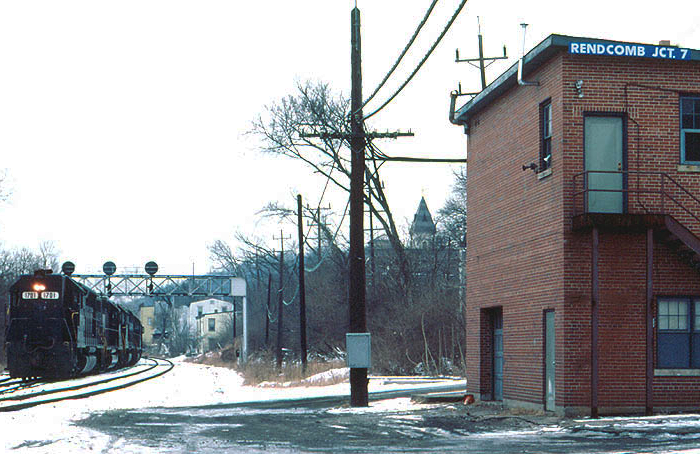 6) The next point of interest is Rendcomb Junction, where we come off the connection to the Richmond Branch.  Notice the abandoned red brick two story building on the right side of our train.  We continue onward to the former Little Miami Railroad Line, now called the “Oasis Line” that dates back to 1843.  Just ½ mile past Rendcomb Junction on the right is the home of our beloved “waving couple”.  Listen for your conductor to relate this very entertaining story. Be sure to waive back.

7) We then pass the suburb of Linwood, Ohio traveling underneath the new Beechmont Avenue.  This overpass was rebuilt a few years ago replacing the original bridge.

8) Next we enter Undercliff Yard, built in 1907 and operated thru the late 1960’s. Currently, the I&O uses it as storage track.  When the Ringling Brothers and Barnum & Bailey Circus came to Cincinnati this is where they would store their train which transported both the animals and the performers. 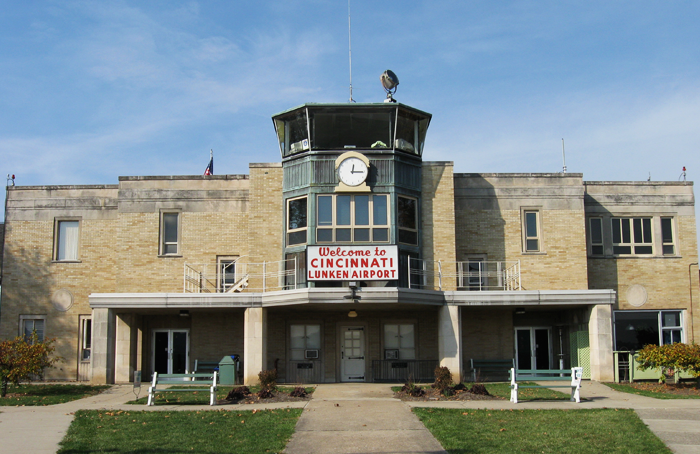 9) Lunken Airport is on the left nearby. The airport was built in late 1920’s and dedicated in September of 1930.

10) On the right is the remains of the R.K. LeBlond Machine Tool Company. The company operated from 1917 to 1989 at which time they relocated to Mason, OH.  LeBlond was at one time one of the world’s premier tool companies in production of lathes and other tools.

11) At the west end of the former railroad yard on the left side of the train is Pioneer Cemetery. The cemetery dates back as early as 1790 and contains at least three and possibly five Revolutionary War veterans, including the grave of Sgt. William Brown, the first man to be awarded a purple heart by George Washington. The cemetery was conveyed to the city by the Cincinnati Baptist Union Church in 1937. Keep an eye out for the tall Corinthian pillar that was taken from the old Post Office building, which was erected in 1856. The pillar was placed in the cemetery in 1888 after the Post Office was razed.

Also buried at Pioneer Cemetery is Major Benjamin Stites. Major Stites and his brother and others, founded this area a few months prior to the city of Cincinnati being founded in 1788. He came upon this area of our city when he chased Indians down river from Maysville Kentucky after they stole some of his horses. He felt the area was so special that the following year he brought back a flatboat full of settlers to form a new settlement. Local lore has it that in 1843 when the railroad tracks were being laid, the railroad agreed to move many grave markers to higher ground but refused to move the bodies. It is very possible out train rolls right over many of the bodies of our cities first settlers. 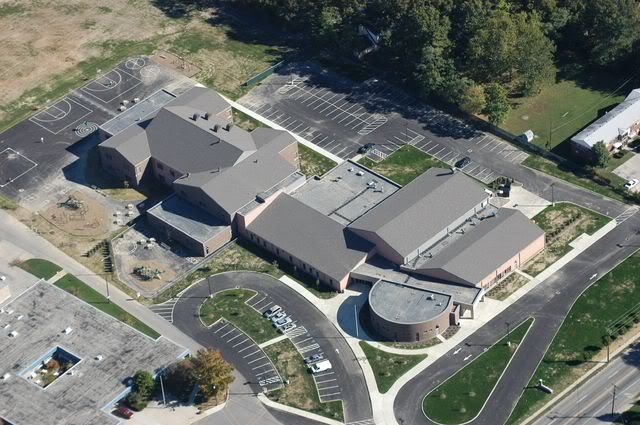 12) On the left is Riverview East Academy, a new school designed to be able to withstand high flood waters by virtue of the foundation stilts.

13) Next on the right is Jeff Ruby’s Precinct Restaurant. This was at one time the substation for the Cincinnati Police Department.

14) Just before we reach our destination, you will see the Duke Power Company natural gas facility located on the left.

15) On the right side is a new condo development called Twain’s Point @ Adams Landing. 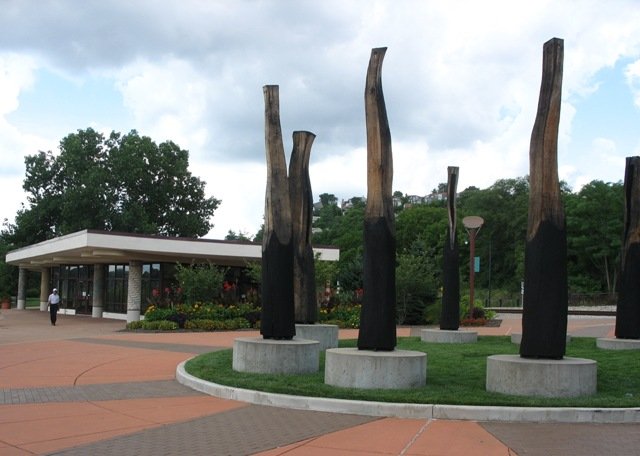 16) Once downtown, you will see Theodore M. Berry Park, named after the former Cincinnati mayor.  Also on your left just south of the run around track is Cincinnati Barge & Rail Terminal.  This barge offloading company owns the tallest crane on the Ohio River which can be seen as we pass.  All of the land west of the crane once was the location of the Fulton Steam Boat Company which claims to have built 80% of all steamboats ever built in the U.S.

17) On our way back to our boarding location approximately 3 miles from downtown, we will be making a very special stop.  This is the highlight of our historical tour of Cincinnati.  Please read the Torrance Road handout located on your table prior to our stop.  Your conductor will give a four minute presentation.

Cincinnati Dinner Train
All August and September tickets are now SOLD OUT.

Our office will be closed Monday the 4th.

Purchase a four top table in one of our four dining cars. A full four course dinner will be served during our ride downtown. Two bars on board will be available for purchasing beer, wine, or cocktails.

Price $130.00 per person. Ages 12 and older. Tickets for this event will become available for booking on July 11th at 10:00 am at www.cincinnatidinnertrain.com.

HINT: if using a gift certificate as payment and it begins with the digit "0", drop those leading 0's when entering the g/c number on the payment screen.

Cincinnati Dinner Train
Cincinnati Dinner Train is looking for a Head Chef to work Saturday shifts. Must have reliable transportation. Prior kitchen experience preferred, but will train the right candidate. You would be preparing Saturday 4-course dinners, with the assistance of kitchen staff, for our 180 guests from their choice of 4 entrees & 2 desserts (decided in advance).

If you like working in a fun, yet fast-paced atmosphere, email us at hr@cincinnatirailway.com and someone will email/call you for additional information if we see a good match. We'd love to have you on our team!

Cincinnati Dinner Train
from a previous passenger......"My father collects trains and we saw the last steam engine leave Union Terminal when I was younger. From the bottom of my heart, thank you again for having this dinner train, because before my dad got sick, he got his train ride, and really enjoyed the Cincinnati Dinner Train experience!"

Happy Father's Day to all of the dads in our lives! To both those who are with us in person and those with us in spirit!